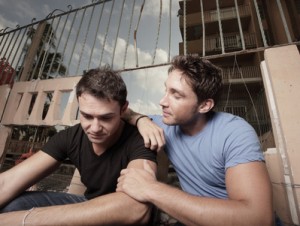 I often see this question or similar in counselling forums on Facebook and elsewhere on the net. And as a mental health counsellor who has worked with gay men for much of my career, it’s tempting to jump in with an answer. But what concerns me is what the answer to this question might mean for those asking or reading it. What effect does it have on us as individuals if we develop the idea we are more prone to depression? And how might we start thinking of our gay identity if we begin to believe in some kind of collective depression?

Depression is a very general word for a huge range of conditions. More to the point, it is largely considered a health issue these days when it also might be related to existential questions, life transition, burnout or adjustment to new life circumstances.

Email me now for a private consultation

Now I don’t want to suggest that we should not be concerned about health if we are, or someone else we know is, feeling depressed. But there is a long history of lesbians and gay men being viewed as disordered in some way, especially by the medical and psychiatric professions (I call it being ‘pathologised’). And while the idea that gay sexuality is a disease might be on the way out, there is still a tendency to look for and see abnormalities in gay men. This can be a self-fulfilling prophecy: we look for evidence of depression and we find it!

The Facts about Gay Depression

There is some research evidence that, currently, lesbians and gay men do present with higher rates of depression and mental health problems than people who do not identify as lesbian or gay. However, that’s not to say there’s anything about same-sex orientation that causes depression. For example, studies show that lesbians and gay men receive more improper treatment and discrimination from mental health professionals than general populations. If your doctor or therapist is treating you badly, it is not surprising that you might not get well! For the most part, science and common sense now prevails in countries like Australia, the UK, Canada and most of Europe. Psychologists, psychotherapists and doctors in those places – with a few exceptions – are generally now of the opinion that same sex desire and attraction is ‘natural and normal’. But misunderstanding, insensitivity and bad practice continue. We develop as adult gay men in a society with many informal rules and attitudes prejudiced against gay sexuality. Is it any wonder that the mental health of some lesbians and gay men suffers as a consequence?

At the same time, there is no common biological or genetic cause for depression that is unique to gay men or lesbians. I would propose that if we lived in a world without such strong gender roles, where our same sex sexual attraction and desire was considered as equal to heterosexual attraction and desire, there would be no differences in the rates of depression or anxiety between gay, bisexual or straight people. I’d like to think we are working towards a time like that.

In the meantime, it is just as important to understand the protective factors for gay mental health as the so called risk factors. When health is the focus, it is not surprising that a visit to a GP is often the first response for someone who is depressed. Doctors are concerned mostly with drug therapy including the prescription of medication like SSRIs. These include, for example, citalopram (trade names Cipramil, Celexa etc); escitalopram (trade names Lexapro etc); fluoxetine (trade names Prozac etc) and sertraline (Zoloft, Lustral etc).  But many people who have been prescribed anti-depressants do not know that best practice for medication treatment of depression is a combination of treatment that includes talk therapy. Doctors usually refer to counsellors or therapists for talk therapy that might take the form of CBT (Cognitive Behaviour Therapy), other forms of psychotherapy such as narrative therapy or counselling for depression or anxiety. The important thing is that medication alone may not be enough – it might not even be required – and patients should at least be offered talk therapy. Gay patients should always be offered a gay-friendly counsellor, for example, a Medicare practitioner available for gay clients or a private therapist for gay men.

I always felt I didn’t fit in …

It’s important to talk about problems. Sounding them out with an understanding gay counsellor can also be a way through our difficulties. It’s by talking about ourselves and our relationship to others that we get a sense of who we are, our identity. Research shows that development of positive identity for gay and lesbian people leads to adjustment and life satisfaction*1.  An understanding gay therapist can help you start making connections and developing relationships with other gay men. Gay people who participate in activities with others enjoy higher levels of psychological well-being. Peer support is important when coming out as a gay man whether you are a teenager, middle aged gay guy or older gay man who has been married.

Times are changing. Just 6 years after his own experiences of homophobia as a schoolboy, Dr Mark McCormack returned to 3 British high schools to research teenage boys attitudes towards homosexuality*2. He expected lots of homophobia but found hardly any. Instead he found that boys were no longer expressing their heterosexual identities through homophobia & homophobic language, but through being inclusive of their gay peers and proud of their pro-gay attitudes. He found that being a gay teen did not not negatively affect a boy’s popularity, but being homophobic did. In the schools he examined, he found that boys were able to develop meaningful and loving friendships across social groups.

So let’s not write off the entire lesbian and gay population as at risk of depression! Let’s talk about our common experiences and share our personal stories with those who are willing to listen and support us. I work as an online therapist and counsellor for gay men and others. If you would like to discuss your circumstances or experiences with depression, contact me today and make an appointment.

What is Bisexuality? And how do I know if I’m Bi?

Private Skype Counselling in English for Expats: Tips and Support for Your Journey