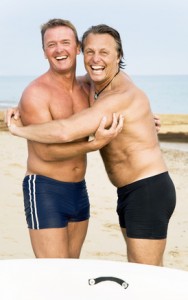 If you are a man in your forties, fifties or older, taking the first steps towards identifying as gay or bisexual can feel difficult and frightening. You are not alone. Many men have made this journey before you. And therapy with a supportive and affirming gay counsellor over webcam or through telephone counselling offers a number of benefits.

Reassurance and Support for Older Gay and Bisexual Guys

I just needed someone to listen to me, someone to open up to. Releasing that inner turmoil made all the difference to me.

Firstly, it can be reassuring to know that you are not the only man who has dealt with sexuality concerns at your age. It can help to talk with a counsellor, and particularly one who is also gay and specialises in working with gay men. Letting off steam and getting things off your chest can can relieve the pressure of what is going on for you.

Facts and Information about Homosexuality and Bisexuality

If you are gay or bisexual, you can also ask your counsellor / therapist questions such as…

The simple answer to this is that it can and does change! However that does not mean we or anyone else can ‘make’ our sexual orientation change. There is absolutely no scientific evidence that we can choose our sexual orientation or have it altered through so called ‘conversion’ programs or ‘ex-gay therapy’. While such ‘conversion therapy’ programs run by religious groups make all sorts of promises and claims, they generally only assist people to not act on desire or sexual orientation. In other words, they don’t take away desire or change homosexual orientation. The long term dangers of undertaking these programs appears to be an increased likelihood of depression and mental illness amongst men who have been in the programs and been discouraged from accepting themselves for who they are.

I have heard of and know of many men whose interest and attraction to other men has commenced later in life, just as I have also heard of gay men whose interest and attraction to women has commenced later in life. Interest in sex and particular sexual activities can change over time as well. Diversity and change is part of nature and nothing to be ashamed about.

Something that we can influence is how we feel about our sexual orientation and how comfortable we are with ourselves and our identity. We are able, with the help of others, to develop a positive sense of our own gay identity, homosexuality or bisexuality. There are also a number of things you can do to help you feel better about sex.

Having been raised in an overtly hetero-centric society, most of us have had times when we did not feel particularly good about our homosexuality. I specialise in talking with men about shame and sexuality and have found that gay-affirming conversations are one way in which shame can be reduced. It can also be helpful to get together with other gay or bisexual men and share experiences of resisting shame associated with sexuality. Shame is something that can lead some gay or bisexual men to question whether they are suffering from sex addiction.

I work with both straight and gay men in relation to pornography use. Some guys enjoy using pornography while others have mixed feelings and talk about how using pornography is getting in the way of how they would prefer to relate to others (including their partners) or use their time. Something that stands out for me is that it is often easier for men to talk about their pornography use than their relationship with their bodies or use of masturbation. These are subjects that might also be easier to discuss in webcam appointments and I have found many men prefer to meet online rather than go and see a therapist in person.

Facts about HIV / AIDS for Older Gay and Bisexual Men

I know this is irrational but I still fear it.

My advice is to get as much professional advice about this as possible. Don’t rely on random Internet googling because there are still so many myths around about HIV. Some reputable information sites are:

In the UK: Terrence Higgins Trust

Tools for Coming Out Later in Life

I speak to many men who are in their forties, fifties and sixties (and sometimes older) and starting to explore being gay or bisexual. There is no right way to make these transitions and every man has his own set of circumstances to deal with. At the same time, if you are in this situation, there are many others who have been through similar experiences and plenty of first hand knowledge to draw on.

In these therapeutic conversations, there is usually a lot to talk about. It can be a difficult time and some men feel they are aging too fast. But it can also be a time of excitement as you start living life in a different way and receiving acknowledgement of the steps you are taking. Positive experiences of your identity might include sex but are unlikely to be just sexual.

Sometimes people ask me to tell them what to do. It can be comforting to think there might be a right answer to a situation. Part of my role is to help people to find their own way and sometimes I can suggest practical things you might be able to do to feel more empowered about being gay or bi or understand these ‘new worlds’ (for example, ideas about how gay people can make new friends). But I can also assist you to work out issues and devise strategies for yourself.

If you need to talk about your sexuality or are navigating your way through the transition to gay or bisexual identity, contact me to get more information on my services and fees.

This is the second part of an article about help for men who are married to a woman or coming out in later life.